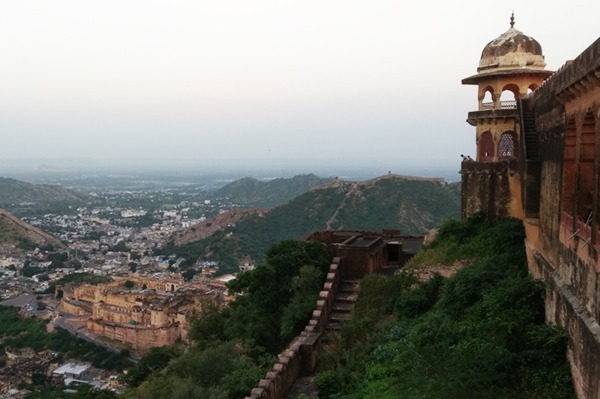 Few people venture up to Jaigarh Fort, which is a shame as the views are spectacular.  It was built to protect the City of Amer in 1726 and from its ramparts one gains a perspective down over the valley, to see its strategic position and also the surrounding lakes and remnants of the 3rd longest wall in the world, the Jaipur City Wall. It was linked to the Amer Fort by a secret subterranean tunnel which has now been reopened so that you can also easily traverse between the two. It is well worth the effort as it is an amazing view point  and provides wonderful photo opportunities.

Visit to the Elephant Village:

Elephants are synonymous with Jaipur as they have always been used by Royalty for their status and processions as well as originally being used in battle and for tiger hunting. These requirements are no longer applicable in today’s world but there is still a large population of domesticated elephants in Jaipur that are unable to be released into the wild. We therefore support the places whose focus is on looking after these gentle giants, taking care of their well being in a wonderful countryside environment. Therefore, rather than ride one of these elephants up to the Amber Fort, we suggest spending the morning or even a full day with them at one of these venues. Here you can learn all about them, discover the differences between the Indian and African elephant, help prepare their food, bathe them and even take them for a walk, they need a lot of exercise! 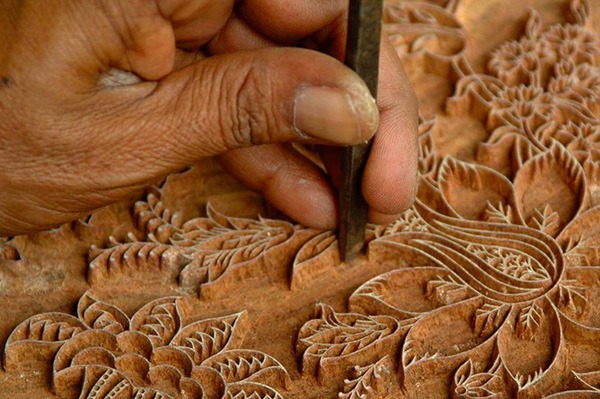 Visit to the town of Amer, Visit the Anokhi Museum of Printing, The medieval step well of “Panna Meena ka kund” & many temples & havelis.

At the edge of the Sariska forest in Rajasthan lie’s the town of Bhangarh whose haunted status is attracting scores of excursions. Known for its ruins, Bhangarh is also a pre-historic site. Legend states that the city of Bhangarh was cursed.

The story goes that this sixteenth century town was home to a magician. He fell in love with the kingdom’s beautiful princess, Rani Ratnawati. Knowing that he would never be allowed to go near her, he decided to use his dark powers to seduce her. He spotted the princess’s maid buying oil and cast a spell on the oil. If the spell worked, on touching the oil, the princes would surrender to him.

Locals say that the princess, who was proficient in the occult herself, soon sensed his evil plan and foiled it. She threw the flagon of oil away, whereupon it fell on a stone. As soon as the oil touched the stone, it started rolling towards the magician and crushed him. But before dying he cursed the palace with the death of all who dwelt in it, without the possibility of rebirth.

That might be more legend than fact, but Bhangarh is still a charming ruin to visit. Even today, a walk to the palace through the remains of what once used to be a bustling town is a beautiful affair. 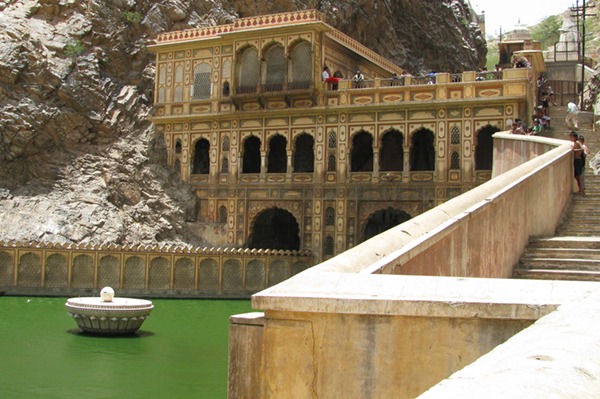 Galtaji is an ancient Hindu pilgrimage site situated just 10 kms from Jaipur. A picturesque gorge cradles Galta Kund as it is also known, an 18th century religious site with two main temples and a number of small shrines. Its seven sacred tanks are fed by natural spring water and the “Surya”Sun Temple high on the ridge provides spectacular views of Jaipur city. Galtaji is also famous for the large tribe of celebrity rhesus macaque monkeys who live here – they were featured in the National Geographic channel’s ‘Rebel Monkeys’ series. 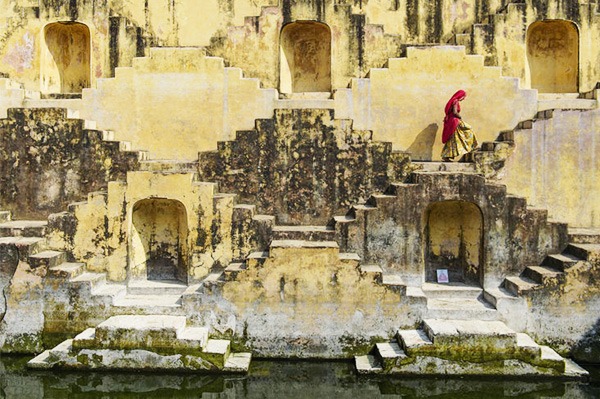 If you have time during your visit, venture out to Abhaneri, an archaeological wonder you won’t find in many guidebooks. In this ancient village is one of India’s oldest and deepest step-wells. Built in 9th century and has 3500 narrow steps and 13 stories and is 100 feet deep. Step-wells, unique to India, were used as a royal baths, reservoirs and provided respite from the summer heat. Abhaneri is the most impressive step well in Rajasthan and remarkably it still offers the rare opportunity to sample a stunning architectural antiquity without the crowds.