Home / Our Story / Our Hotels

The Mandawa Group of Hotels.

Mandawa Haveli is the third in the group of hotels which forms the Mandawa Group of Hotels. Our other hotels are equally steeped in history: 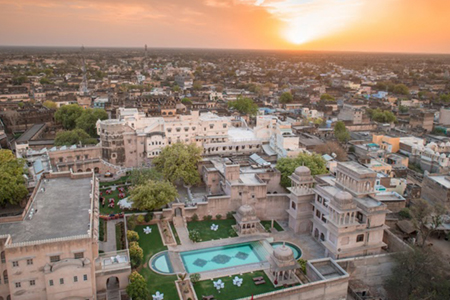 Castle Mandawa was one of the first heritage properties to open as a hotel, a decision the family took in order to welcome guests to experience true Indian hospitality and have a glimpse into the lives of the Royals of Rajasthan. Their pioneering concept was to invite travellers to come and explore the rich heritage of the region and they went on to win the National and State Tourism Awards for the best hotel in the “Heritage Category”.  The castle, located in Mandawa, was built in 1755 in order to protect this desert outpost from the bandits which used to roam in this region. A town soon developed around it which became the main base for many of the traders, transporting goods by traversing this harsh, yet spectacular landscape.

Today, thanks to modern roads and transport, Mandawa is an easy three hour drive from Jaipur but once there, it transports you into the world of the wealthy merchants of that era and the homes that they created for themselves. These wonderfully painted havelis, now synonymous with this region, were designed not only to provide colour and exuberance in this harsh desert environment, but also as a show of prosperity and success.

Castle Mandawa, steeped in the history and stories of that time, is a wonderful base from which to explore these mansions, their surroundings and the rustic villages beyond. It is a curious mixture of the old and the new. Medieval turreted towers and palanquin-roofed balconies, blend with modern comforts in the original rooms, now converted into guest accommodation. Family portraits, antique cannons and arms showcase the rich history of this family-run hotel where the rich traditions of both the region and it’s rulers, still run strong. Even time is measured by a different clock… a huge brass gong struck by the resident timekeepers at the fort every hour! 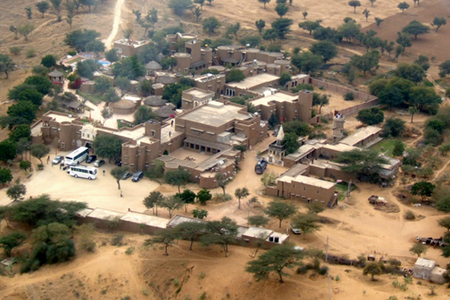 The Desert Resort:
The Desert Resort, just one km away from the town of Mandawa was opened in 1983. Conceptualized on a sand dune, this unique and charming retreat makes a great setting for a fabulous vacation. In contrast to the grand and imposing Castle, the desert resort was designed to replicate the local, rustic tribal villages. Taking elements from each of the trades of the village communities, farmers, potters and weaver’s 73 huts and rooms have been built, following the design and rustic style of the people of the land.  In addition to influences from the locals, the resort houses a water body that feeds out of recycled pool water to attract the birds and animals from the region. We are proud that it received the National Tourism Award for seven consecutive years.